The default Seafowl installation operates in single-node mode. It uses the local filesystem to store its catalog as a SQLite database and actual data as Parquet files.

While this works well for proofs of concept (and can get you pretty far in production if you cache Seafowl query results), you might find yourself needing to run multiple Seafowl instances to serve more concurrent requests.

This guide will show you how to configure Seafowl to run with a shared PostgreSQL database for the catalog and a shared object storage. This will let you run multiple Seafowl instances, each completely stateless.

See our GitHub for an example Docker Compose stack for this deployment pattern.

PostgreSQL as a catalog, Minio as S3 storage 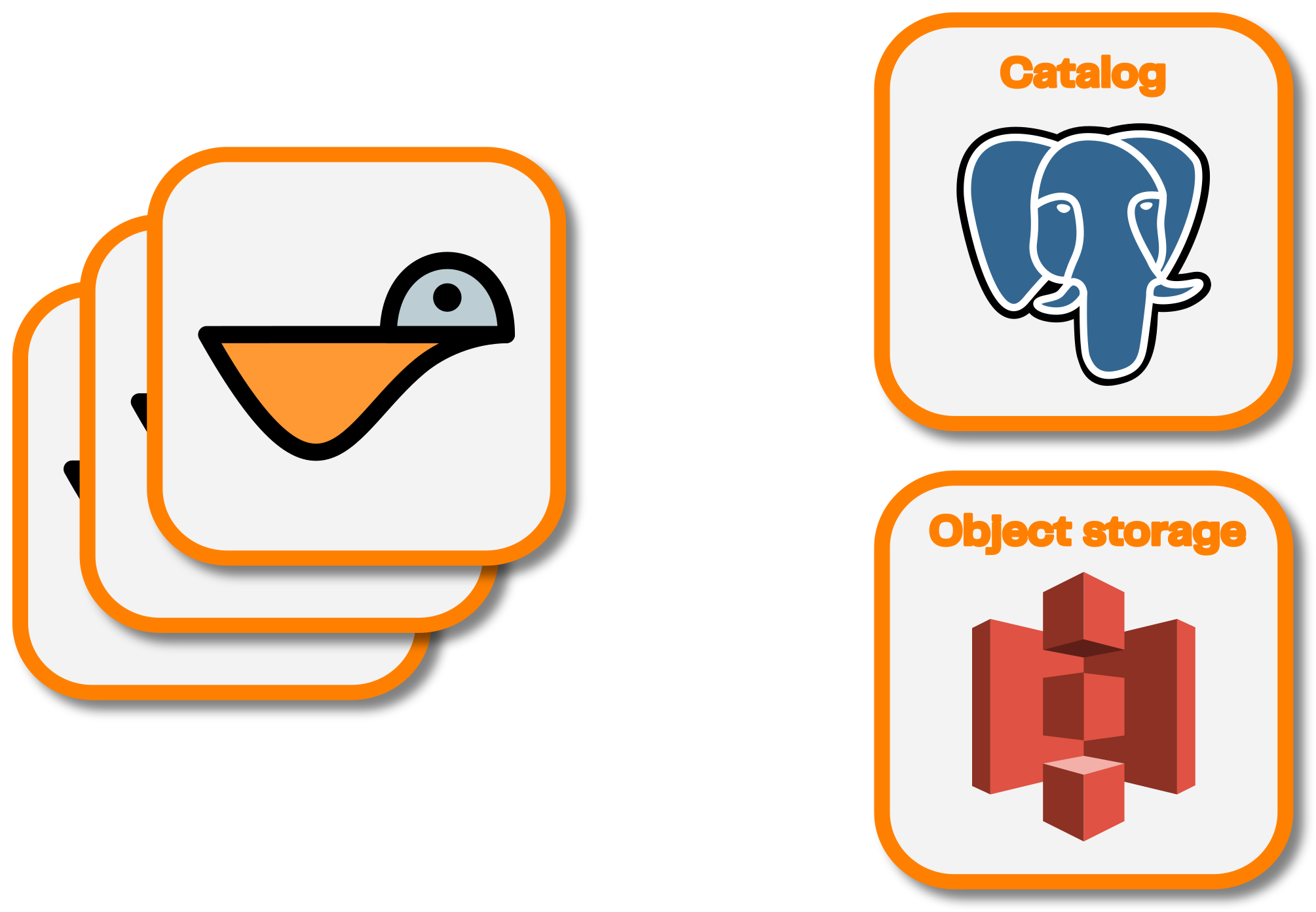 Instead of SQLite, Seafowl also supports a PostgreSQL catalog that is shared between instances. To configure it, edit the seafowl.toml config file and replace the default (or use environment variables):

To store the actual data, you can use any S3-compatible storage, for example, AWS S3 itself, Cloudflare R2 or a self-hosted MinIO instance.

Or, if using Minio or localstack, use the endpoint parameter instead of region:

This deployment pattern makes any Seafowl instance support reads and writes. There are alternatives that might be more suitable or efficient for your use case.

Instead of using PostgreSQL for the catalog, you can use SQLite with LiteFS.

See our GitHub for an example Docker Compose stack for this deployment pattern. 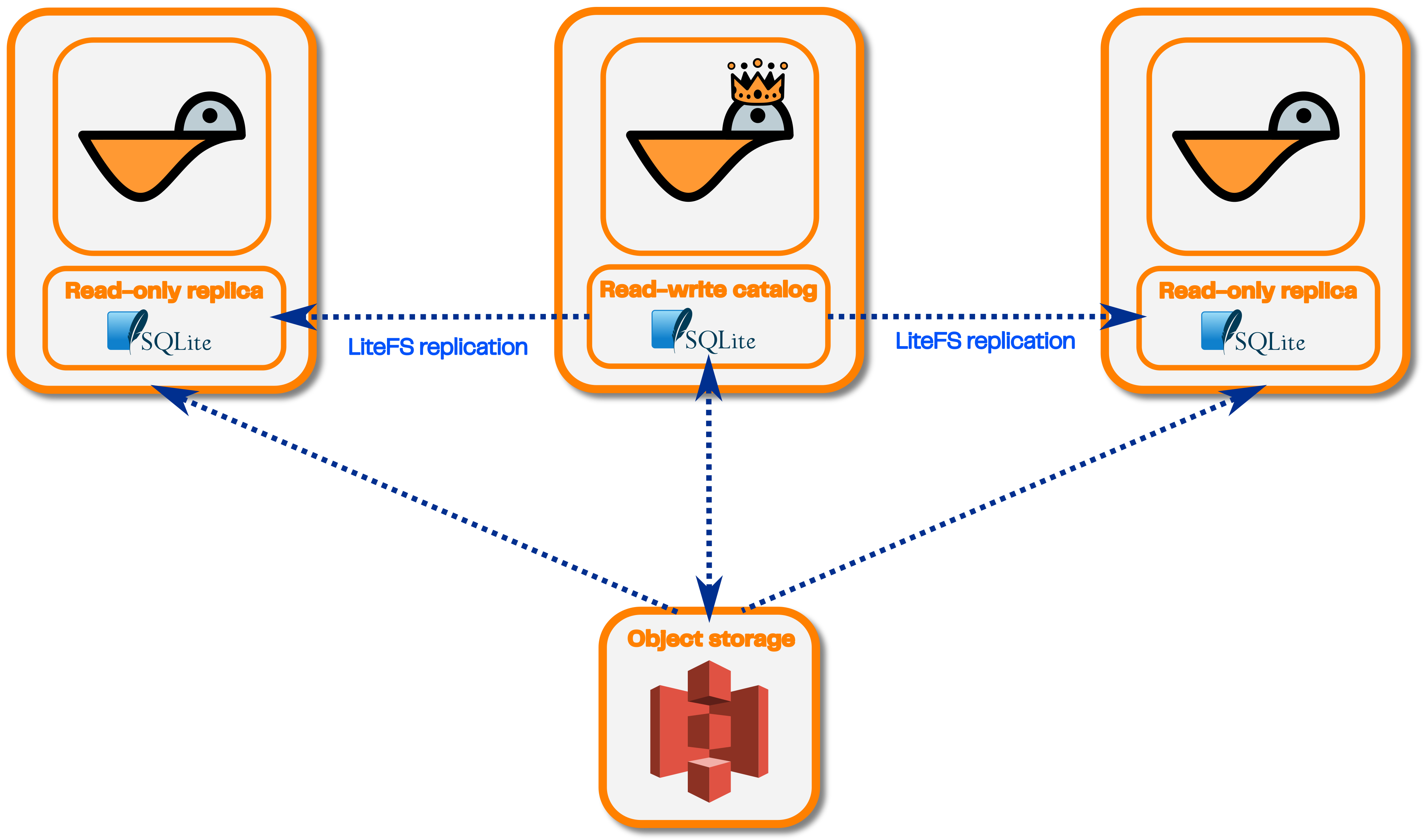 LiteFS is a tool that lets you replicate SQLite databases from a single read-write reader to multiple read-only followers.

This will let you scale Seafowl for low latency read-only queries cheaper in terms of infrastructure costs (since you won't need to deploy a PostgreSQL database or set up PostgreSQL replication). There will be a single Seafowl writer instance that you can send write requests to. Reader Seafowl replicas will pull changes to the SQLite database from the writer and will be otherwise completely stateless.

No writers, many readers: baking the data into a Docker image

If your dataset is small enough (up to a few hundred MB), another possible way to scale Seafowl is to build and deploy a Docker image that contains the Seafowl binary, the SQLite catalog file and the data itself. This has its own tradeoffs. See the relevant section for more details.

This is not distributed query execution

These deployment patterns only concern the amount of concurrent queries a Seafowl deployment can run. A query that takes 10 seconds with Seafowl will still take 10 seconds if you run multiple Seafowl instances.

Objects are not cached locally

In environments where your Seafowl instance has some scratch disk space, you may wish to use it as object storage cache to speed up queries and reduce traffic to the object store. However, unlike Snowflake, where each "worker" has a local cache space for downloaded objects, Seafowl instances currently don't cache objects that they download from object storage. This means they will re-download the objects on every query.

We're currently tracking this in https://github.com/splitgraph/seafowl/issues/41.

Splitgraph Limited, registered in England and Wales No. 11657324